It was late January when I decided I wanted to do something different for my birthday, so I asked my friend if she wanted to go with me to Amsterdam to help me celebrate. February soon came and we met each other at the airport in Amsterdam on the 14th of February of all days. My plane arrived much earlier in the day, so I’d already been to collect the keys for the apartment and buy a surprise gift and flowers to welcome her. We took the train to the central station and took a short walk to our apartment. I’d read previously that in winter in Amsterdam all the canals can freeze and you can ice skate on them which would have been really cool. This time it wasn’t so cold, just a little rain which was probably for the best otherwise we’d be spending more time indoors trying to keep warm.

Relaxing on the elevated bed

It was our second time using Airbnb after our short break in Paris for the new year. After looking through thousands of listings which all looked very usual and similar, we found a cool apartment which was a converted industrial unit. Inside was very modern with a big island kitchen, comfortable sofa/lounge area and the one thing that stood out was the bed which was about 6 foot up in the air on top of some storage space. It even had stairs to climb up to get into it! I imagined it’d probably be very easy to fall out of it or fall off the stairs when we were a bit tipsy, but surprisingly we never did and the host said nobody had ever done so either, or at least that had told him. The price of apartments on Airbnb is often comparable to a good standard hotel room in most cities, but you get much more flexibility and a whole house or apartment to cook, relax and live in for the same price. If you’ve never tried Airbnb, you can get a free £15/$25 credit towards your first booking. Well worth a try.

Now onto Amsterdam itself, it’s a city full of culture and interesting things to do at every turn. You can walk just about everywhere in the city within 30 minutes or hop on a tram to get there quicker in about 15. There is a metro, however we never even saw it except at the train station. Most locals seem to ride about on bicycles anyway. Outside the main station there is a 3-story structure holding thousands of them. I’m not sure if they were actually used as it never seemed to get even remotely empty even on a night, perhaps it was just some weird art project instead. We visited lots of places from the quiet city parks and tourist attractions such as the Dungeons and Madame Tussauds to nearby cities on the train and even visited the red light district a few times (strictly looking only of course). 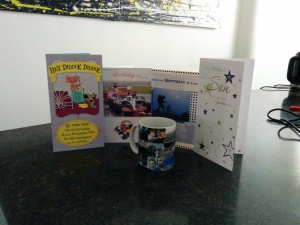 It was my birthday a few days in, February 17th to be exact and my friend bought me coffee in bed whilst I opened my cards from my friends and family. My mum gave me some Euros to spend on a nice meal which we used in Hard Rock café in the evening.  One of my favourite presents was a mug from my friend showing photos of all the places we’d travelled together over the past year. I’ve still not drank from it, as I’d probably accidentally break it while washing it, so it takes pride of place on my work desk.

We decided to go to Starbucks for a scrumptious breakfast and nice coffee in the morning and afterwards went on a boat trip along the famous canals of the city. You could probably travel just about anywhere within the city just by boat, but it would obviously be quite slow, so not much point except to enjoy the scenary. We passed by all the famous sites including several famous churches and buildings and the Anne Frank house where a young girl hid during the holocaust. It’s now a big tourist attraction, however all you can see from outside is a very modern building with a café and lots of people queuing.  We managed to get a table seat on the boat and got sat opposite a solo traveller from Italy. At the end of the trip, he gave us his business card so we could hook him up if we ever were in Milan or perhaps he just liked my friend after we told him we were not together. In the afternoon we went to the Amsterdam Dungeons. We had to queue a long time, but once inside it was really atmospheric, a little scary and the actors were very good and got everyone involved. I’d read there was a small rollercoaster/ride at the end of the tour, however this had been removed a few weeks before our visit unfortunately.

A few weeks before coming I was listening to a podcast by Dave Pearce, one of my favourite radio DJs and he mentioned someone whose record he was playing was due to play in Utrecht in the Netherlands in a few weeks time. I’d never even heard of this city before, so I looked it up and found out that there was a massive electronic trance event called ASOT 650 (A State of Trance) happening when we were there so I bought some tickets as a birthday treat to myself. There were 4 huge rooms each with a different DJ playing every 2 hours from 8pm to 7am in the morning including Armin Van Buren, Cosmic Gate and Dash Berlin among others. This was the first such event I’d been to on such a scale. Apparently there were 45,000 people there, that’s almost twice the population of the town I live in dancing in a large conference centre in a random city in the middle of the Netherlands. They even had café areas serving up everything from hot dogs to smoothies and vodka to mojitos. I liked the little bottles of red vodka called Flügel, a fun drink to try at a party. When we left at just gone 4 in the morning, we had to take a half hour train journey back to Amsterdam. I was falling asleep on the way back, but managed to just about stay awake so we didn’t miss our stop and end up somewhere far away from where we wanted to be.

Talking about trains, we took a few other day trips to various towns and cities across the country. It’s the best way to travel as trains are regular, efficient and reasonably priced. The first place was Haarlem, a small city (or town by UK standards) with a big Gothic church in the central square with streets running off in every direction filled with quirky houses, picturesque windmills and remainders of ancient castles. I remember this place well because of the tasty homemade cakes we had in a nice cafe overlooking the square. You’ve probably noticed by now I like to eat and drink sweet things, relax and just take everything in.

The second place we visited on the train was Zandvoort. When people think of Amsterdam, the last thing that would come to mind is a beach. In turns out they have one which isn’t very far away. It reminded me almost exactly of an English seaside resort. There were tall, old apartments/hotel buildings, lots of take-aways and the beach and water were a bit murky. It wasn’t the best weather for sunbathing too, but we can probably blame that on the time of year. I’d imagine it wouldn’t get much busier in Summer as nowadays it’s just so cheap and easy to go somewhere much nicer for your summer holidays, like Magaluf for example.

After deciding to extend our trip by a further 3 days, we took the train again to Rotterdam which was about 2 hours away. The contrast to Amsterdam is huge, it’s much more modern, has lots of tall office buildings, big chain shops, shopping centers and a big metro system compared to Amsterdam’s small canal side houses with almost no modern influences in sight at all. We spent the night here in a new hotel CitizenM which consisted of pre-fabricated rooms which were just slotted into a pre-built structure. Everything you needed was in the room which was less than the size of a shipping container and everything was controlled by a tablet: the TV, window blinds, curtains and even the mood lighting in the shower.  My friend kept changing it while I was in there, so annoying! There was also a strange stuffed patchwork teddy in every room which was a nice touch, we called ours “Brian”.

They had an awesome cocktail menu too; we must have tried just about every one that evening until we couldn’t drink any more. A really great end to an amazing holiday. It has to be one of the best trips I’ve had this year for sure and can’t wait to go back again for more of the same.

Locations in this Article

What do you think? Cancel reply