As everyone else in the UK is going back to work this week, I’m here in another cool apartment (with a jacuzzi under the bed!) in Kiev, Ukraine writing my annual year in review post, well my second at least.

This year I’ve travelled to less places than last year, however I’ve still managed to travel for 95 days over 7 trips to 18 different cities in 4 countries and travelled over 10,541 miles via plane, bus, car and foot. Most of that time has been spent in Ukraine with my girlfriend; it’s also the first time I’ve visited this country once in every season. Here are a few highlights from this year:

Fun & Play in the Netherlands

After visiting the world’s biggest dance event last year, I decided to visit again for my birthday. I started with a few days in Amsterdam with a new friend seeing all the usual touristy sites, followed by a quick train ride to Utrecht for a night’ stay in the lovely Mother Goose hotel. We only managed to get a few hours sleep as we can home from the concert early in the morning. I returned to Amsterdam for 3 more days staying in the ibis Amsterdam Centre hotel which was rather basic, but had a unique view on to the station platform from the breakfast room. I was also lucky enough to attend FITC Amsterdam for 2 days of design, technology and “cool shit”.

Due to my love for the country and my new found relationship, I spent the rest of my time between the UK and Ukraine:

I first came in April for a short 3 week trip with nothing specific planned other than meeting my friends and discovering new places across the city of Kiev. I did climb Ukraine’s equivalent of the Statue of Liberty which was really cool and an ideal location for a selfie.

I met a couple of nice new people, one of which took me urban exploring to an abandoned bridge and who I also conceded to that I wasn’t so good at drinking lots of Vodka. I also met another girl, Yuliya on Couchsurfing for a quick coffee date on my second to last day, we had a nice conversation, said our goodbyes and thought nothing more about it.

On my way home from my previous trip and for the month in between, the same girl from the coffee date began writing to me on WhatsApp. We became good friends and arranged to meet again on the first day of my summer trip. She invited me to a family wedding party near the river and off we went for a BBQ and obligatory vodka and champagne sampling. Ever since, we have been together, all after a single random coffee date.

Later on in the same trip, we decided to embark on a 10 day 2,000 kilometre road trip around the country visiting all the places from my wishlist including beautiful gardens in Uman, a secret soviet underground missile base, Europe’s largest floating fountain, grand castles of south, a famous university, the Carpathian mountains to climb Ukraine’s largest mountain, the classic city of Lviv finally followed by Klevan’s romantic Tunnel of Love, among many other cool places. 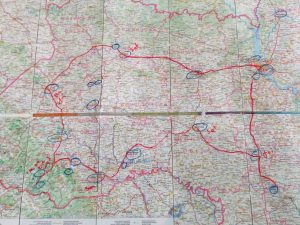 Another highlight was “Mystery Play“. In a nutshell, the concept is that they take inspiration from films and place you into a live action universe of one of them. In our case, it was the film Shawshank Redemption, the top rated film of all time on IMDB.  We were told to meet outside a metro station where a coach would pick us up and take us to the prison. On disembarking the bus, we were greeted by the prison warden, guards with guns and dogs and given a sack with prison clothes for us to change into.  In our team, whilst being shouted at and treated like actual prisoners, we had to complete tasks and solve puzzles in order to escape the prison. It was generally very well put together and the atmosphere was great and very realistic. The only downside to it was that everything was in Russian so I had to rely on my team mates for translations. I’m sure I would have enjoyed it much more if they also had an English version, however it did make it all the more scary not understanding everything!

I suggested to my parents previously that they come and visit Ukraine to see why I visit so often, but they didn’t seem so keen on the idea which is understandable because of all the negative things they must have seen about the country in the news. To my surprise they did want to come this time, and decided to come for a week at the start of my month long trip. We travelled together on the same flights and we took them to their apartment that we had booked in advance via a nice taxi to make everything easy for them. During their trip, we took them to see all the main sites including Andrisky descent, various museums and squares and a travelling circus with dancing bears. They said they liked the city and were pleasantly surprised. They have since told all their friends who I hope will spread the word, that Ukraine is not such a bad place.

After they left I spent 3 more weeks there, generally just living, working and enjoying my time. We had one weekend away in Radomysl Castle (pictured in the header) a few hundred kilometres from the capital. I was surprised to find such a nice place in a random village in the middle of Ukraine. Most Ukrainian people I had told about this castle, hadn’t heard of it before, so it was good for me to share with them something new.

I’ve only just started my most recent trip, but I’ve already experienced New Year in Myrhorod in temperatures approaching minus 20 degrees Celsius. I was walking on lakes and rivers covered in thick Ice with my winter coat whereas six months previous I was in the same place in a Pedalo swimming with just my swim shorts trying to keep cool. This is one of the things I like about Ukraine, they still have real seasons where you can actually tell the difference between them whereas in the UK we are very lucky to even get snow for a day or two usually.

Shortly, I’ll be travelling to the mountains again for my first time in Winter and also my first time Skiing. We’ll be staying in my favourite hotel in Ukraine, the Radisson Blu Resort, Bukovel with nice mountain views, only a few steps away from the nearest piste.

Despite the good time I had, I doubt I will be repeating the Amsterdam experience for a 3rd time this year, it’s time to find something different. I’d like to visit Germany again for sure, but this time to Hamburg to see Miniatur Wunderland for sure and also visit a cool rollercoaster restaurant where the food comes to your table on a mini rollercoaster.

Also on the cards is a short trip to Moscow to visit my girlfriend’s mother and of course many more trips to Ukraine, likely to the black sea or visiting Europe’s only desert.

I also really should be posting more about my travel and work rather than saving it up for my yearly review post. Hopefully I can find the motivation to post more regularly in the future.

Locations in this Article

What do you think? Cancel reply